A bridge may be one of the most popular techniques among patients, but it´s also known to be inefective for some situations.  There are four main reasons for choosing an implant over a bridge for tooth replacement.

A bridge provides a “false tooth” which only “floats” above the gum tissue, therefore the bone is not being used. These will cause you several problems in a near future. An implant is actually placed into the bone and acts like a natural tooth and strengthens the supporting bone. It´s known that over a 10 year period, approximately 20% of bridges fail and need to be replaced. The main cause for this is due to decay of teeth supporting the bridge.

To create a span for a bridge, two or more teeth require “cutting down”, so the bridge can be fitted over them. Studies show that up to 30% of these teeth that are “cut down” will require root canal therapy. When an implant is placed, no other teeth are disturbed since the implant is self-supporting.

Bridges can’t be flossed like natural teeth because they´re in a single piece. The floss has to be threaded underneath the false tooth in order to clean the supporting teeth. This usually takes some extra effort and for this reason, most people don’t clean their bridge(s) as often as they should.

The bone loss from lack of function in the missing tooth area and the difficulty of cleaning under the bridge increases the possibility of developing decay and periodontal disease leading to failure of the bridge. The replacement must  feel like and look like a natural teeth and be easy to keep clean.

The first step is to replace missing tooth roots by placing a titanium implant. It’ll remain covered underneath the gum for a few months. They should be inserted in the most ideal site for a natural tooth to be able to handle the load of chewing and biting. After that the procedure involves uncovering the implant and attaching an extension. The final step is the placement of the new tooth. The length and width of the implant also needs to be taken into consideration with the factors of the tooth it’s replacing and the bone type involved. 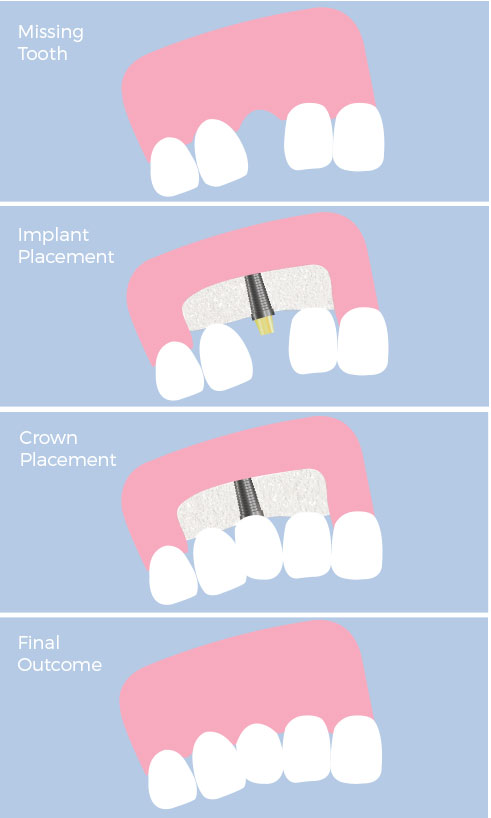 One of the top dental care specialists

GET AN APPOINTMENT NOW!